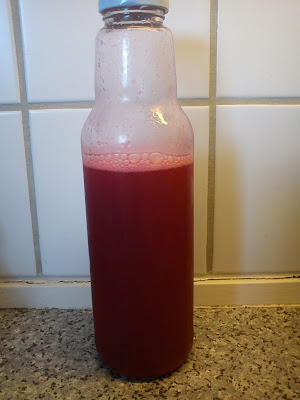 As I still had some rhubarb stems left from my visit to the garden in Horsens, I decided to make the very last portion of rhubarb cordial of 2013 !!!! This time I used another old recipe clipping from a Danish magazine, where I again have no idea of the original source.

Have a look at the picture of this rhubarb cordial, is it not an amazing dark red colour it is having ? Wauuw I am crazy with this red colour, which I know my cousin will be as well.

Email ThisBlogThis!Share to TwitterShare to FacebookShare to Pinterest
Labels: Cordial and lemonade, Rhubarb