Yes-yes-yes, I have made progress again on my task about baking my way through the baking book called "Hjemmebagt". This time it was the bread called Kartoffelbrød (= potato bread), which has been baked in my little kitchen. 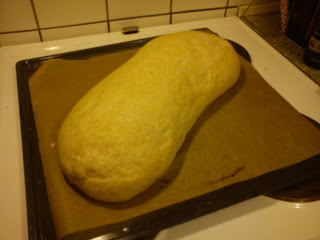 I assume, that you from the bread title will know, that potato as well as the boiling water from the potatoes are ingredients. However, besides from this wheat flour, rye flour, yogurt (I used Greek yogurt with 10%), dark syrup and fennel are the ingredients in this bread.
As I could not find any ground fennel in the supermarket, I had to buy fennel seeds and grind them myself in my coffee grinder. This is giving a lovely flavour of liquorice, so I was again sniffing around in the kitchen, sniffing to my coffee grinder and to the dough.

The bread dough was quiet unusual, when I was kneading it, as it did not feel moist at all, actually the dough was very, very dry almost like flour. So I had to knead one small portion of the dough, when another small portion, before I managed to knead it into one big dough portion. SO I was very, very doubtful, if this dough would turned into a normal bread dough. However, after the first period of raising the dough look and felt like any normal bread dough. 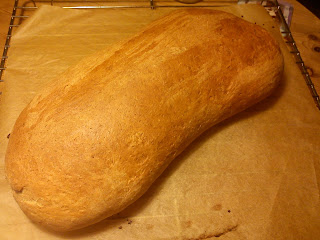 The final bread has a very fine flavour with a delicate look-a-like liquorice note. And the softness of the bread remains for a longer period, before the bread becomes stall. This should according to the recipe be due to the potatoes. I must admit, I have no clue about the effect on adding potatoes into bread dough, as it the very first, which I have add potatoes into my home-made bread.
Posted by Kitchen of Kiki at 18:25