Cheese cake with liquorice and lemon a la Isabella

According to the Danish magazine Isabellas cheese cakes should be the new "hot" cake after cup cakes and pop cakes. What attracted me looking into the various cheese cake recipes were the "heavy" use of full-fat dairy products like cream cheese, Greek yogurt with 10% fat, dairy whipping cream and finally a little amount of butter. And when I saw, that one of the recipe on cheese cake was containing liquorice and lemon, I simply NEEDED to try this very specific recipe.

I found, that the cake amount is giving more than actually mentioned in the originally recipe, so instead of 5 mini cheese cakes, I got 6 mini cheese cake + 1 glass of the cake filling. And to refer to this size of 7 cm form as mini cheese cake is something of exaggeration, these cakes are huge !!!

With all the full-fat cream cheese, full-fat yogurt and dairy whipping cream, the calorie content is enormous, so you really full after eating one of these cakes.

The taste combination with lemon zest and liquorice is just wonderful. 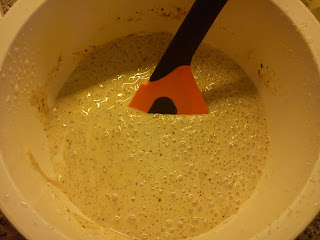