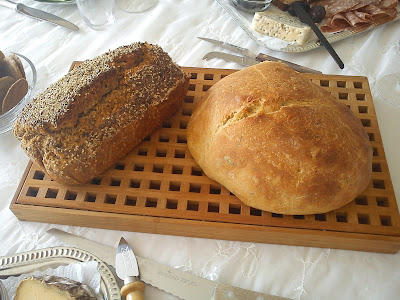 "Hjemmebagt" - 73 recipes - 28 accomplished = 45 recipes to bake
﻿
Further progress my way through the bread bread "Hjemmebagt", and with this Rosmarinbrød (rosemary bread) I have baked 9 different recipes already in 2013, which is an amazing high number compared to 2012, where I only managed to bake 6 recipes in total. 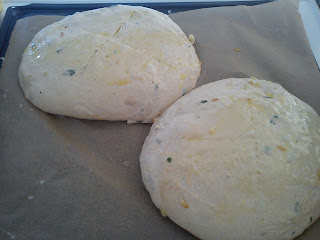 This time it was the bread called rosemary bread, which is a bread made first from a pre-dough, which when is used to make the final bread dough 14-16 hours later on from wheat flour, yeast, salt, water, olive oil, mashed potatoes, pepper, rosemary and 50 g roasted roughly chopped garlic. So a more correct name for this bread would have been garlic bread with a touch of rosemary.

The bread taste amazing and the garlic taste/smell is not dominating in any way. Or perhaps I can not smell anything having bake the bread, but I see no vampires in my surrounding :-)s 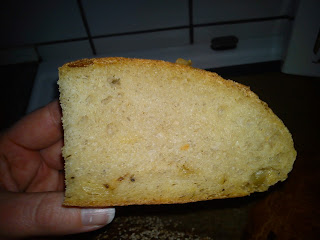