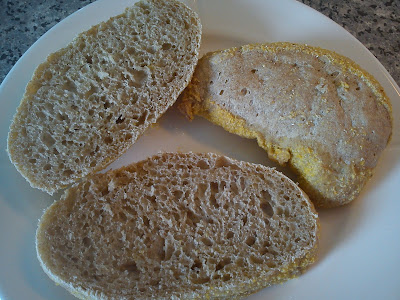 Slowly I continue to bake my way through the excellent bread book "Hjemmebagt". I do not bake so much during spring and summer season, as I spending a lot of my spare time rowing on the water of Vejle Fjord = less time to bake bread and cake.

However, last Sunday quiet windy, so I decided not to go rowing, giving me some time to bake instead of. This time I bake some smaller bread/buns called "Små citronbrød" (small lemon bread), which are some sort of dinner rolls.

The dough is made from fine sieved wheat flour and whole grain rye flour, salt, water, yeast and the peel of one lemon, which is a little unusual. I could smell the lemon, while baking the rolls, but the lemon taste is not dominating at all in the final dinner rolls. Perhaps addition of juice from the peeled lemon could increase the lemon flavour ?

Before baking the dough is rolled into a roll, which is covered with oil followed by addition of corn flour as the decoration part. Afterwards the roll is sliced, and each slice is laid down with un-oiled surface facing upwards on baking paper prior baking.

The dinner rolls will not be my favourite recipe in the future, as the word lemon mean, that I was expecting a more dominating lemon flavour/taste in the final rolls.
Posted by Kitchen of Kiki at 18:42