Sale of muffin as "PINK" fund raising at work

I have some amazing work colleagues, which yet again participated in a new muffin fund raising event for the fight against breast cancer as well as their positive response to this idea of mine. So a huge thank you to all of you for your support :-) as well as your nice comments on my PINK attire. I was addressed as "lady in pink" by several colleagues yesterday at work.

In October month there is a lot focus here in Denmark (like many other places in world) on breast cancer as well as collecting money to support both research in this sickness as well as support to women living with it. 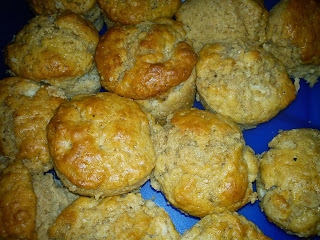 As my colleagues showed great support at last year´s pink muffin sale, I decided to involve them again. It is becoming more and more easy to step out my own comfort zone "demanding" money from them prior to eat my muffins. This year I had baked muffins with Danish apples and cinnamon.


As usual I leave it to each of my work colleagues to make up their own mind on the amount of money, they like to donate. And if they for suggestion, I suggest 10 DKK as starting point. I received donations from 15 work colleagues, which in total donated 344 DKK, which equals a price on 22.93 DKK for each muffin, which is almost 7 DKK more compared to the last year´s fund raising, where a muffin selling price was 16.05 DKK. As any amount of money (not fixed value) is accepted by www.araceagainstbreastcancer.dk, they are receiving the collected money.
Posted by Kitchen of Kiki at 12:40