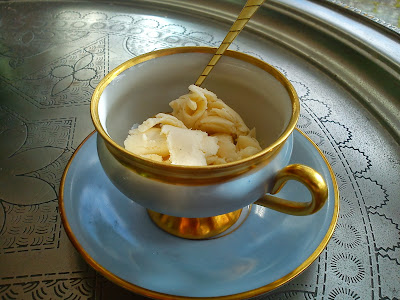 So yesterday was the BIG day, where I used my brand new Nemox ice cream machine for the very first time in my little kitchen. And it was a good day to do, as it was grey and rainy outside, so what better way to comfort yourself inside hidding away from Autumn making ice cream !!!

And it was your decision, what the very first ice cream to be produced on my ice cream machine should be vanilla ice cream. The ice cream election in September was actually a very, very, very close run up among the three proposals in form of 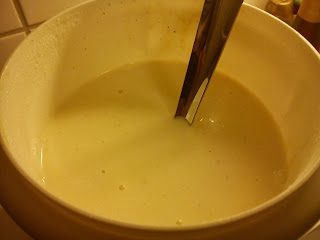 I received a total of 25 votes. And I know, what some persons were voting both in the Danish and English vote, and this is OK with me, as long as you just vote. The votes were given like this:
So it was actually a tie between vanilla and liquorice. Some of  my colleagues (being very technical food people) taking part in this vote, all more or less voted on vanilla, so I/they could get an understanding of my ice cream machines capabilities. So therefore I set my heart on making vanilla ice cream, as I already have shared a liquorice ice cream recipe with you. Even though, that my good friends in Horsens are very un-happy with this decision of making vanilla ice cream. I actually received a comment from Horsens demanding a recount of all the votes !!!

Even the recipe on the vanilla ice cream has been a MEGA HUGE discussion point at work between my colleagues and I. I have found this vanilla ice cream recipe in the brilliant cooking book called "A Country Cook´s Kitchen" by Alison Walker. However, according to my colleague this recipe is having too little amount of milk solids non fat combined with a too high level of dry matter and no magic powder inside (functional food ingredients) !!!! So here in October I have decided to make two vanilla ice creams, this recipe here and a correct designed vanilla ice cream made with kind help by my work colleagues !!! 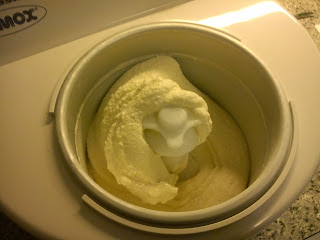