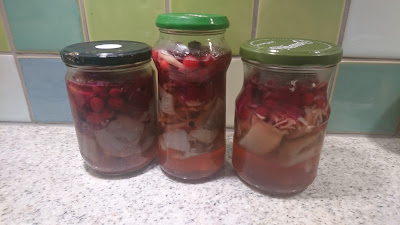 I have found this recipe on marinaded herrings with cranberry and red onion last Christmas in the weekly magazine "Alt for Damerne". However, it is first now, that I have had the time to actually made these herrings.

Marinaded herrings in all different types of flavourings is MUST on the Danish Christmas lunch table for a lot of people me included. However, believe it or not, some Danes do not likes herrings, they really dislike herrings!!! When describing marinaded herrings to foreigners, I refers to marinaded herrings as Danish sushi :-)