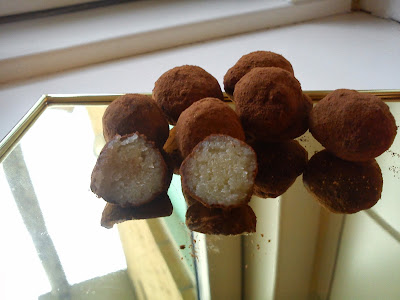 This type of Christmas candy I remember back from my childhood. It is something, which is very, very easy to make even for children. And it does not involve any electrical things or something warm, which you can burn yourself on. So I assume you say SAFETY FIRST, if you make this candy at home. The only thing could perhaps be dusting from handling the cocoa powder.

In order to be a little daring, I decided to spice up the cocoa powder with addition of cinnamon. Cinnamon is is a NEW dangerous food stuff here in Denmark due to this content of coumarin, which can cause liver damages. But again here I am playing safe using the real cinnamon from Ceylon, which has a lower content of coumarin compared to dangerous cassia cinnamon.

Well, why is the Christmas candy called marzipan "potatoes" ? Well the marzipan balls resemble a potato with it´s brownish surface and whitish inner core. The good thing, that you do not need to neither peel nor wash this "potato" in order to eat and enjoy it.