Christmas lunch 2013 for "The Wonderful Women" 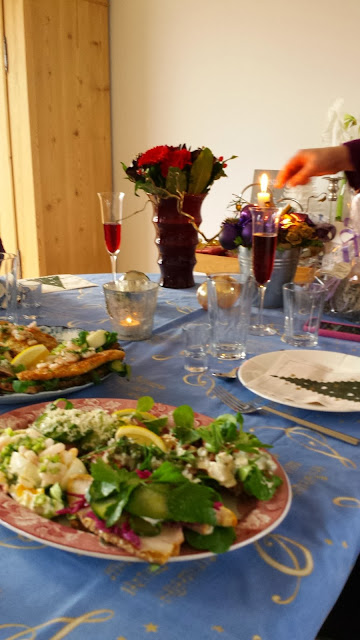 The annual Christmas lunch for "The Wonderful Women" took place yesterday afternoon. However, the year we decided to break with the tradition within both the food and entertainment area !!! Instead of the usual cheese tapas we agreed as a group to try a new "menu" in form of smørrebrød (open Danish sandwiches) from restaurant Remouladen (awarded the best Danish lunch restaurant of 2012), where I also got the food from for my birthday lunch this spring.

As each piece of smørrebrød is relative big, I decided, that two persons easily could share one piece and thereby get the option of tasting various types of smørrebrød. I had ordered the following pieces of smørrebrød: 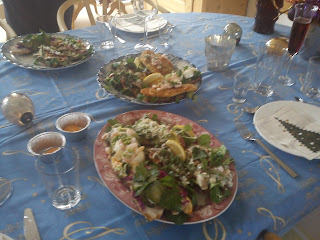 All the pieces of smørrebrød are very nicely decorates with plenty of green stuff such flat-leaf parsley and watercress and chives. And the taste is just excellent. The fried filet of plaice is actually pan-fried instead of being fried in boiling oil like fries. 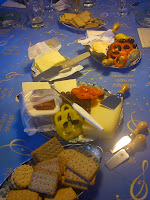 As tradition dictates we started the Christmas lunch with a bobbling cocktail, where I will share the specific recipe on later stage such as in the new year.

After the eating of the smørrebrød we got a nice cheese board with some great tasting cheeses of mostly Danish cheeses.


In breaking with tradition on the entertainment side we this year decided to play package game (pakkeleg in Danish), where each person as minimum had brought minimum two gifts. And these gift can be every thing incl. leftovers from Christmas. So where were gifts of an empty Christmas beer bottle, final portion of Christmas tea, leftovers Christmas butter cookies, the ingredients for red cabbage salad or ris a la mande incl the almond gift for this very specific Christmas dessert. We did not play this package game with dice, but a bunch of cards telling how the gift should be moving around on the table. It was great fun :-) 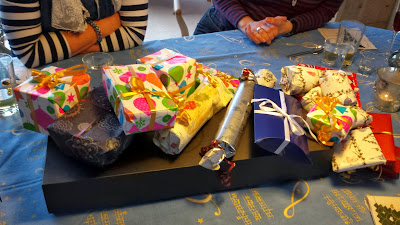 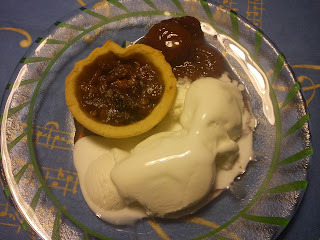 After all the excitement of the package game it was time for the final food point on the menu: Christmas dessert plate made from Christmas ice cream, mince pies and Lønnestræde´s plum in spiced red wine year 2013, uuhhmmm :-) 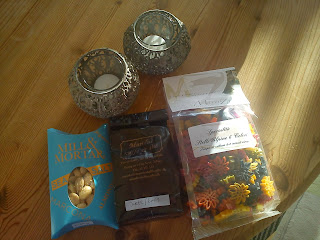 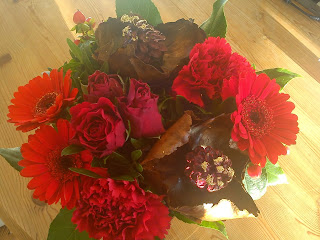 As usual all these amazing girl friends are invited again for Christmas lunch next year in 2014 :-) And the missing fifth girl friend made her appearance this year after her long travel around the world, which prevented her from taking part last year.


After all "The Wonderful Women" had left the building/house, Hannibal the Cat decided, that he needed to relax after all this female entertainment/noise, so he took a nap on the dining table :-) 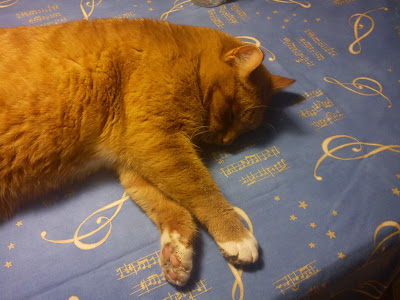 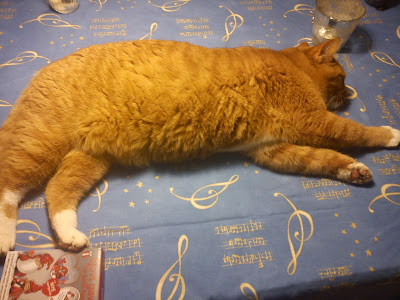 Email ThisBlogThis!Share to TwitterShare to FacebookShare to Pinterest
Labels: Dining in, Hannibal the Cat, Hostess gift