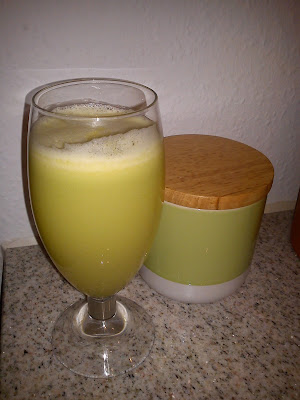 Again a JuiceSelvKasse has found it´s way to my kitchen door, so I can indulgent myself with freshly pressed juices :-) The first juice is called DAYDREAMER, which has a good balance between freshness, fruity flavour profile and sweetness, so all in all a great juice to be enjoyed.

I decided to juice the orange without peel, as I do not like the bitterness coming from juicing too much like, as the lemons are juiced with it´s peel on.

Posted by Kitchen of Kiki at 21:01 No comments: 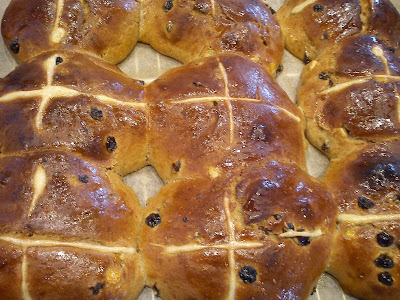 Today is Easter Monday or second Easter day, which is the the final Easter vacation day here in Denmark. So tomorrow the normal working day starts again for many of us.

But lets enjoy this afternoon reading a book, drinking tea and eating hot-cross buns, which is a classic Easter bun. I have located this recipe in Country Living, issue April 2016. And I have made no modifications to the recipe.

Posted by Kitchen of Kiki at 15:22 No comments: 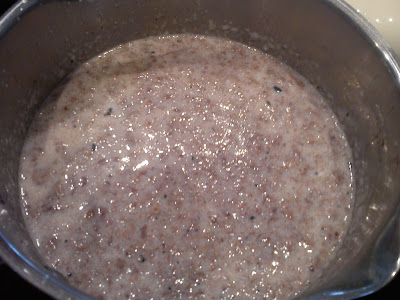 Today it is Easter Sunday, which very often is celebrate with a big Easter lunch with friends and family. As dessert for such an Easter lunch you could serve cherry ice cream.

If you think why cherry ice cream, when is has a very simple explanation, as I still had some cherry sauce left from Christmas. And here in Denmark we say, the Christmas lasts until Easter, so this is an excellent occasion for using the remaining Christmas ingredients for Easter eating.

It is important that you do not add the cherry sauce to the ice cream base before, as this will give a drop in pH, which when the milk is heated will curdle the milk. Therefore my first attempt on making cherry ice cream ended up in the kitchen drain !!! The cherry sauce did not taste acdic, when I taste it prior to adding to the milk base, before heating, but apparantly the cherry sauce was more acidic than expected by me.

Posted by Kitchen of Kiki at 19:59 No comments:

Wafers with lemon and liquorice 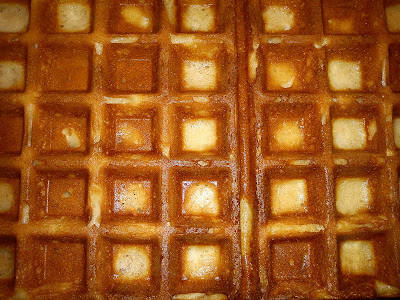 Today it is Easter Saturday, which is the third day in the Danish Easter vacation. Today we should enjoy some more wafers either for dessert.

Again today I have been testing as well as enjoying my new kitchen equipment (Tefal Snack Collection). The selected ingredient today is lemon together with liquorice (classic Danish flavour  combination), as I have to make wafers using one or more of  the assigned ingredients in form of lemon, cinnamon, apple, cumin and Greek yogurt.
As provider of the liquorice I used a combination of dark muscovado sugar, which has liquorice notes as well as liquid liquorice flavour. Liquorice powder could have been used as well.

The taste of lemon and liquorice is not very dominate, it is more to the delicate side, so for more taste dominance the level of lemon peel and liquorice flavour should be increased.

Wafers with lemon and liquorice: - 5 wafers

Posted by Kitchen of Kiki at 20:18 No comments:

Posted by Kitchen of Kiki at 20:18 No comments:

Today it is Good Friday (Langfredag) being the second day of the Danish Easter vacation. And it is also the Wafer Day being the 25 March. Here I have decided to bake Belgian wafers a la Maden i mit liv using my latest addition to my kitchen in form of Tefal Snack Collection. I have made no modification to the recipe, I will leave this for another time.

Posted by Kitchen of Kiki at 13:42 No comments:

Email ThisBlogThis!Share to TwitterShare to FacebookShare to Pinterest
Labels: Easter 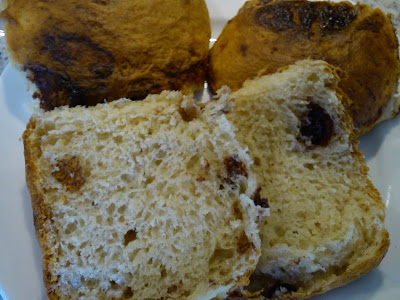 Today it is Maundy Thursday (Skærtorsdag), which is a public holiday here in Denmark and starting off the Danish Easter vacation with 5 days off from work. And at the same time it is the start for my little  Easter Calendar 2016, where I every Easter day will be sharing a new recipe having a relation to Easter of some kind.

As alternative to making home-made Easter eggs from marzipand and choclate, I decided to use these Easter eggs ingredients (chocolate and marzipan) for making bun.

Posted by Kitchen of Kiki at 14:27 No comments:

Broccoli and chicken in curry sauce 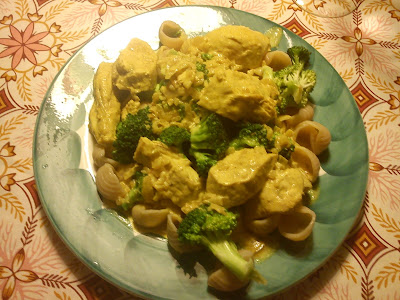 I noticed this recipe on broccoli and chicken in curry sauce in the weekly magazine (issue 08/2016), and when I had broccoli in my weekly vegetable box looking into my kitchen asking to be used, it was an easy decision to cook this dish. I have made no modification to this dish.

Another time I would replace the pasta with rice instead of, as I find paste and curry sauce to be a strange taste match. Another would also be to boil the chicken in some vegetable stock instead of plain water.

Posted by Kitchen of Kiki at 17:06 No comments:

Wafers with cinnamon and apple syrup 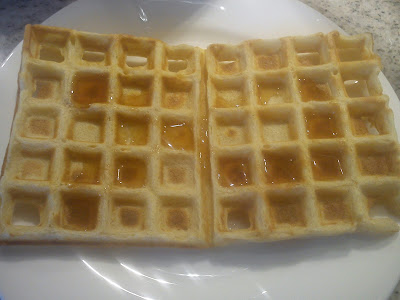 I have been baking the first wafers on my new kitchen equipment (Tefal Snack Collection). I started out with an easy recipe modification using a recipe from the equipment. The modification is, that replaced the vanilla pod with cinnamon, so I could get started on the assignment of using one of more of the following ingredients in form of lemon, cinnamon, apple, cumin and Greek yogurt.

The amount of added cinnamon fills the kithcen with a lovely flavour during the baking process. In order to tick of another ingredients from the list, I served these wafers with apple syrup.

I still have to get acquainted with the baking time, when making wafers, so I was targeting  approx 2-3 minutes in baking time per wafers, which could be adjusted to 3-4 minutes. However, it is not funny eating wafers with black colour.

Posted by Kitchen of Kiki at 14:04 No comments:

Posted by Kitchen of Kiki at 14:01 No comments: 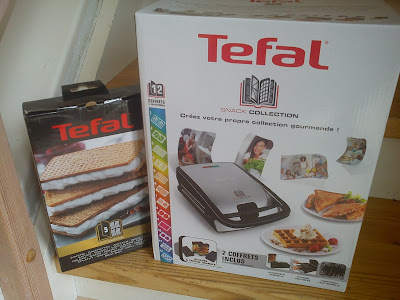 In February I was contacted, if I would like to receive a Tefal Snack Collection with three different insets. The insets stakes for the Club Sandwich and Belgian waffles were standard, while I could choose between the insets for bricelets, heart sharped waffles or thin waffles. I chose the inset for thin wafers, as I imagine that these thin wafers can both roll and stacked on top of each other for make a dessert / cake in several layers.

As "payment" for this equipment do I need to make a minimum of 3 waffle recipes, all of which include one or more of the following ingredients: lemon, cinnamon, apple, cumin and Greek yogurt.

Waffle Day the 25 March 25 comes original from Sweden, where this name is named Vårfrudagen (Our Lady´s Day), which somehow resemble waffle day ! Vårfrudagen is celebrated the 25 March, which is nine months before Christmas. There is no connection between waffles and vårfruedag besides from confusion.

So keep an eye on my blog in the near future, I will be testing and sharing various recipes using having waffers as theme in both savoury and and sweet version.
Posted by Kitchen of Kiki at 17:27 1 comment: 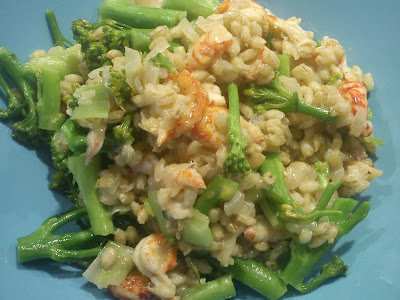 Another great tasting recipe on barleyotto, which I have located in the weekly magazine "Søndag" (issue 09/2016). I think of barleyotto as the Nordic version of risotto, as most of the ingredients are identical (expected that the rice is exchanged with barley grains) and the cooking process in the exactly the same.

I could no find any tails from Norway lobster in my local supermarket I decided to use crayfish instead. Instead of asparagus broccoli you could instead of use "plain" green asparagus.

Posted by Kitchen of Kiki at 18:34 No comments: 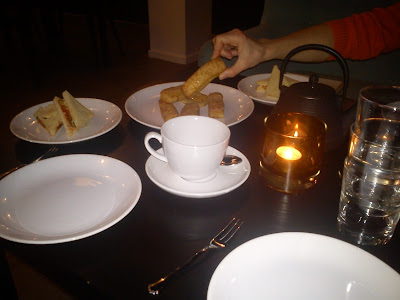 Sunday afternoon my good friends in Horsens and I enjoyed high tea at a new restaurant in Horsens by the name of Gasfabrikken. They are are serving their version of high tea with a Danish modern twist ! The high tea menu follows the English style of sandwich, scones and sweet treats served with either tea of coffee (!!!! yes, you are reading correctly coffee, but this is Denmark with almost world record in coffee consumption). And together with the tea/coffee plain water is also served !

Part of the high tea menu is, that you are served all the tea and coffee, which you would like to have, this is great :-) And with in the tea you can change tea from time to time, which is fantastic as you do not have to "stick" to one tea through the entire high tea.

The high menu is made up from:

For high tea you have to pay 150 DKK (approx 20 €) including all the coffee and tea, which you can drink. We were served 4 pots of three different teas and 1 pot of coffee. The tea were served hot each time :-) 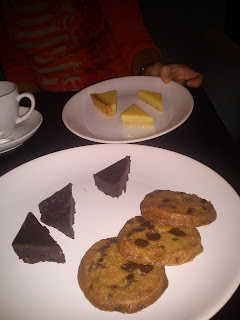 Posted by Kitchen of Kiki at 18:55 No comments:

In my latest JuiceSelvKassen I got the ingredients for the juice called SPICY CABBAGE. I was pleasant surprised by the taste of this juice, which was quiet fruity in taste. And the taste did not turn bitter after storage in the refrigerator. So all in all a good juice to enjoy :-) 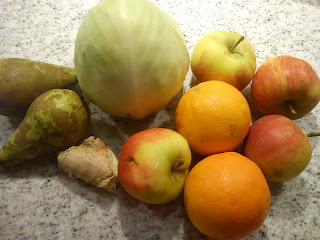 Posted by Kitchen of Kiki at 10:05 No comments: 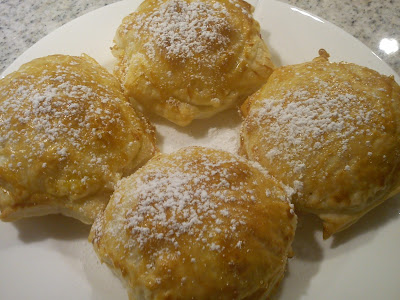 An easy sweet treat, which takes no time to make, if you have some ready-to-use puff pastry. I have locate the recipe in the weekly magazine "Søndag", issue 09/2016.

Posted by Kitchen of Kiki at 21:02 No comments: 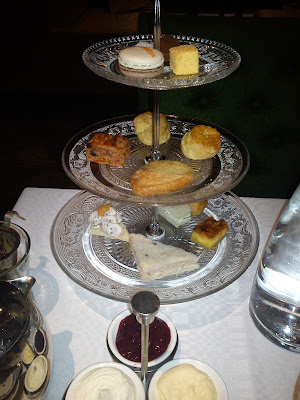 During a recent business trip to Finland I noticed, that afternoon tea was served at Salutorget. So after a working day full of customer meetings I decided it was time to enjoy some tea and refill my head with new energy.

The afternoon tea menu is served between 14-18 o'clock and it has a very classic English profile with it´s:
The serving, the entire menu and the location is very good looking. However, I found that the temperature of the served tea temperature was dropping to fast, so the black tea was too cold eating the menu.

The taste and texture of the food was to the plain side, so nothing exceptional.

For this afternoon tea I paid 30 € incl one glass of sparkling wine. I will give this experience 2½ stars.

This upcoming Sunday I will be enjoying high tea at Gasfabrikken, Horsens together with my good friends from Horsens. I hope I will be served hot tea at this high tea ! 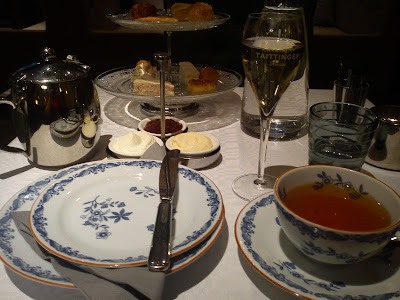 Posted by Kitchen of Kiki at 17:54 No comments: 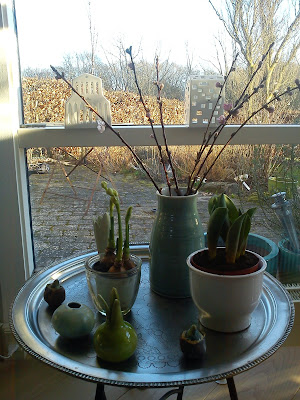 Even though the outdoor temperatures still are to the low side here in beginning of March, the amount of daylight easily brings Spring into your mind. Inside as well as outside various spring bulbs are pushing their heads higher and higher into the air.

Along Spring this month of March is bringing both Easter (24-28 March) and Waffle Day (25 March), so I think I am able to promise you plenty of sweet treats, waffles and something with eggs and chocolate :-)

So lets start this first Spring month of March with a little inspiration for you and your kitchen in form of waffle. If you should have any ideas, which I could use for the upcoming Waffle Day and/or Easter, please feel free to leave a comment :-) 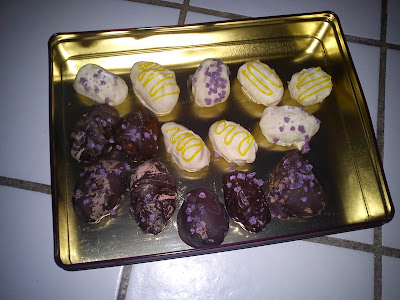 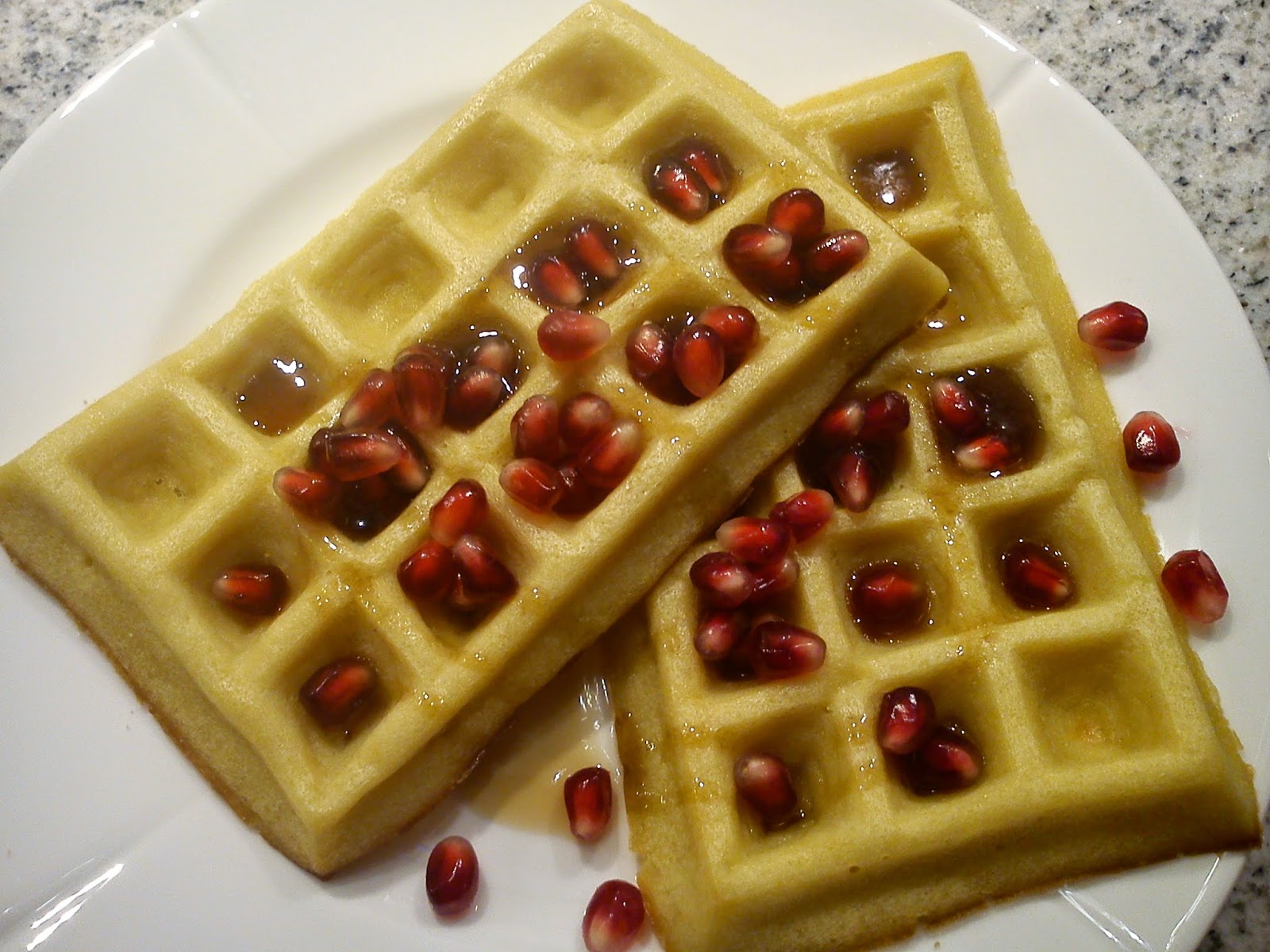 Vanilla waffles
Posted by Kitchen of Kiki at 19:52 No comments: