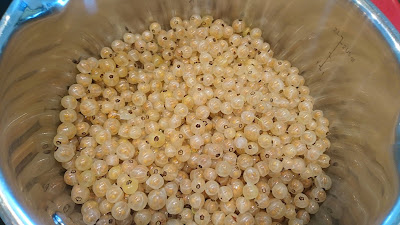 As both red as well as white currants contains plenty of seeds, it is recommend to sieve the currants into a puree, which is when added into the rhubarb.

I also think, that you will have more of red colour in the final jam, if you have access to red currants instead of white currants.

And as usual I bring most of my home-made jam with me to work, so my work colleagues can buy the jam and I donate the money to charity afterwards. I make much more jam, than it is possible for me or my mother to eat. It is the creation process, which I find fascinating.

As other suggestions for jam made with rhubarb you could also have a look into this rhubarb - raspberry jam or rhubarb - apple jam. However, the gelled texture is much stronger in this rhubarb - white currant compared to the other two rhubarb jams.