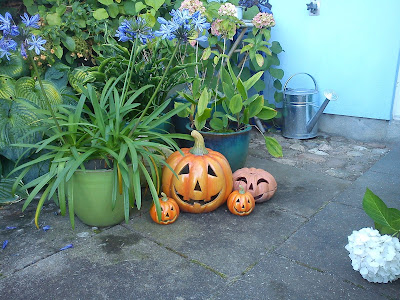 I am not celebrating Halloween by dressing out as a scary monster or handing out candy to children knocking on my front door demanding "tricky or treat".

For me a "celebration" of Halloween is more linked to decorating the outdoors with pumpkins, which you can light up either by candle light or electrical lights as a way of bringing light into a very dark time of the year here end of October and all of November. It is a very dark of the year as the month of December involves much more decoration of both inside and outside with plenty of lights.

And as pumpkins have become more and more in season here in Denmark, you will find more and more recipes on either soup or cakes having pumpkin as the main ingredients.

As inspiration you could look into these recipes:


And tomorrow I will share the recipe on pumpkin soup with parsnips and potato, which I have enjoyed for Halloween evening of 2018. 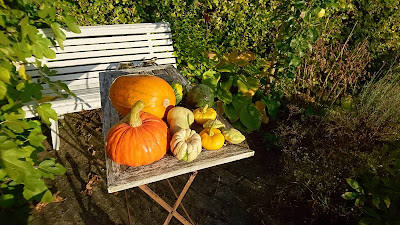 Posted by Kitchen of Kiki at 17:25 No comments: 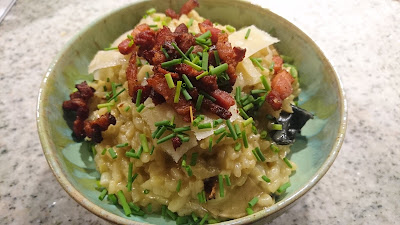 I am huge fan of making risotto. It is not a difficult dish to make, it "only" requires, that you have approx. 30 minutes, where you have to be present in the kitchen, as you have add in the liquid stock little by little.

I have found this recipe on bacon risotto in a the free magazine called " Kulør, issue October 2018". Instead of frying the onion and risotto rice in oil, I used butter. And I as I could not find dried boletus in my supermarket, I used a selection of dried forest fungo as alternative.

Posted by Kitchen of Kiki at 19:51 No comments: 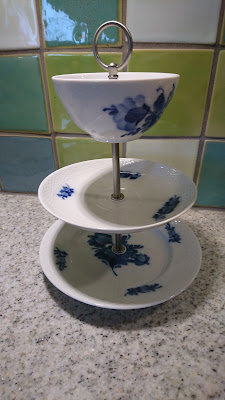 As a supplement for my collection of China to be used for serving of afternoon tea (China tea cups, White Element serving dishes & Blå Blomst tea cups), I have been upcycling a set of Blå Blomst China tea cup and cake dish into a serving  item.

I found the China tea set in a local second hand shop, afterwards I went to the local cafe & decoration shop Cafebutikken Vejle, where I have, that old China cups and plates have been turned to such serving items.

My mother could not believe her own hears, when I told what I had done !!! Destroying China ike this by drilling holes into it !!!! Vandalism !!!!

It costed me 129 DKK to have the Cafebutikken Vejle drilling holes and assembled into such a serving item + the price for the actually China. And it can happen, that the China breaks during the drilling process.

All in all I am very happy about the outcome. And my mother has forgiven me for my "vandalism against Royal Copenhagen China", when she saw the result.

I have a similar item in Christma style in the planning process for serving sweet treats in connection the upcoming Christmas.
Posted by Kitchen of Kiki at 17:44 No comments:

Email ThisBlogThis!Share to TwitterShare to FacebookShare to Pinterest
Labels: China 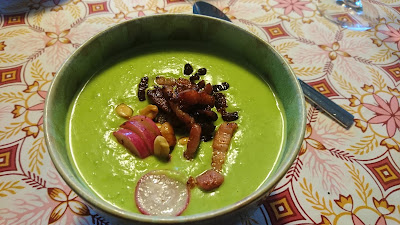 Autumn time is many ways time for making and enjoying various home-made soups.

I have found this recipe on pea soup with bacon in the recipe collection of COOP. I have made a few adjustments. I did not have any lemon, so the lemon zest was not added into the soup. I also decided to fry the radish and nut in the fat of the bacon after the frying of the bacon. Instead of hazel nuts I used cashew nuts instead of, as I could not find the hazel nuts anywhere in my kitchen. And finally I increase the amount of vegetable stock from 1 dl to 2½ dl.

The original recipe states, that it can serve 4 persons, which I find a little hard to believe, at my mother and I almost empty the cooking pot with the soup !!! So in my opinion the recipe only serves 2 persons, if it is served as main course. If served as appetizer, when it can served 4 persons or more.

I found the soup to be a little to sweet in taste, which could be due to the lack of the lemon zest. Perhaps addition of ½-1 teaspoon apple/white wine vinegar could have reduced the sweetness of the soup as well ?

Another suggestion for soup based on pea could be this pea & courgette, and off cause soup on pumpkin is very most in season right here and now.

Topping:
Posted by Kitchen of Kiki at 13:51 No comments: 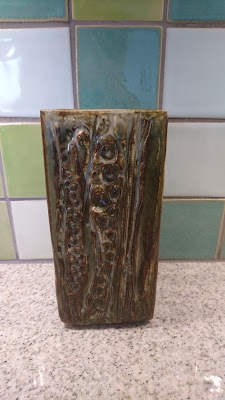 During my recent shopping exhibition in the Limfjord area I stumbled over the retro/antique shop KrejlerbiXen in Nykøbing Mors. As I had already brought a local gin and plenty of dresses, I decided to have a look inside this shop as well.

Here I located some tea cups made by Royal Copenhagen in a old pattern call "Blå Blomst". I also found a "new" ceramic vase in my favourite of green. This vase is made by the ceramist Jørgen Mogensen, which still have a reasonable price level.
Posted by Kitchen of Kiki at 19:52 No comments:

Email ThisBlogThis!Share to TwitterShare to FacebookShare to Pinterest
Labels: Ceramic 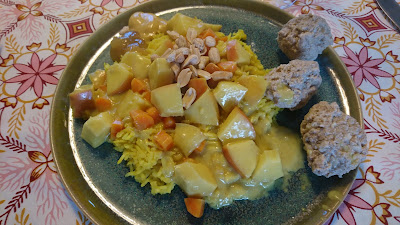 Quiet recently I served these "boller i karry a la Arla" for my mother at our weekly Sunday lunch. This time I located another recipe on boller i karry  from Coop with the use of fresh ginger, soya sauce and coconut cream.

Posted by Kitchen of Kiki at 17:46 No comments:

Pecan nuts and baking magazines from US

Back again in my own little kitchen after a busy week in the US attending an internal company conference. We had a busy schedule from 7 AM to 8 PM all days, however some of us still managed to find both a supermarket in form of Whole Food (nick named whole pay check by our American colleagues) and a shopping mall, where we found some great stuff in Macy's, which was having a sale :-)

As the space in my suitcase was limited due to the shopping for cloth and boots in Macy´s, I only had room for some bags of pecan nuts, a small bag of gourmet gummies with champagne flavour and three baking magazines with focus on baking for the Autumn season and cookies.

My plan so fare is to bake a pecan pie and perhaps scones with pecan nuts. The pecan nuts could also be used for Mont Blanc tarts. 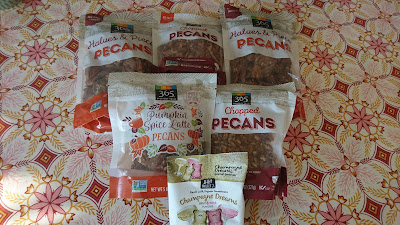 Posted by Kitchen of Kiki at 15:38 No comments: 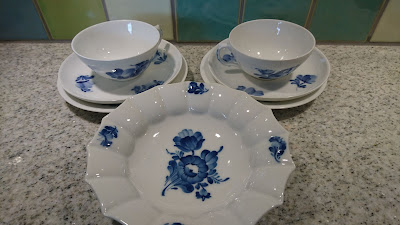 During my recent shopping exhibition in the Limfjord area I stumbled over the retro/antique shop KrejlerbiXen in Nykøbing Mors. As I had already brought a local gin and plenty of dresses, I decided to have a look inside this shop as well.

And here I located some tea cups made by Royal Copenhagen in a old pattern call "Blå Blomst", which is no longer in production. I found this pattern to fit perfect into the style of my other China tea cups in the pattern "Prinsesse" and "Musselmalet Halvblonde", so I went away with 2 tea cups, plates and serving dish for cookies. I also stumbled over a vase in my favorite colour of green, but more this vase at a later time.

So now I can invite 5 guests for a real fine afternoon tea party :-) And my good rowing friends were joking about, that now I could invite all of them around for afternoon tea and they would bring their own individual tea, as we each have our own personal preferences within tea (black, green or herbal), This means, that we on rowing trip bring along these individual teas with us, as we cannot agree about what tea is best !!
Posted by Kitchen of Kiki at 18:35 No comments:

Email ThisBlogThis!Share to TwitterShare to FacebookShare to Pinterest
Labels: China 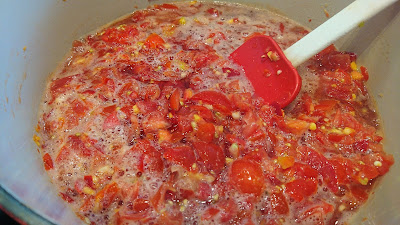 As I am running out of this tomato & chilli jam I decided to cook a new portion of this specific jam. So fare I have been serving this jam together with cheese such as these small sandwiches with matured Cheddar. I would also think, that this jam would fit perfect as compliment for cold meat slices or as part of a sandwich.

As I got plenty of smaller jars with this tomato & chilli jam, I decided to bring some of them to work, where I will sell the extra jars for 15 DKK (approx 2 €) to my colleagues, which afterwards is donated to charity.

Two weeks ago I on behave of my colleagues donated 205 DKK to araceagainstbreastcancer.dk, as my colleagues have been busy buying (and hopefully eating) both gooseberry jam and blackcurrant jam (classic version).
Posted by Kitchen of Kiki at 13:11 No comments:

Email ThisBlogThis!Share to TwitterShare to FacebookShare to Pinterest
Labels: Jam 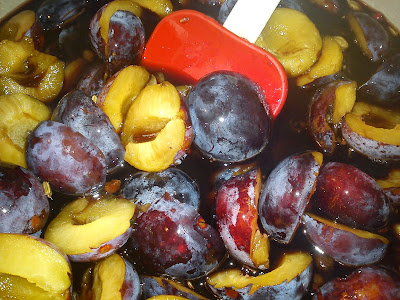 From the garden of my good friends in Horsens I have receive a portion of fresh plums, which I have turned into some jam using my jam recipe book as inspiration with a few modifications.

As I could not figure out, why some of the plum stones should be cracked and added into the cooking pan, I decided not to do to, so people eating the jam would hurt some of their teeth.

The texture of the final jam is a little to the slimy/ropy side, which I have no explanation to, why it is so.

Posted by Kitchen of Kiki at 18:39 No comments: