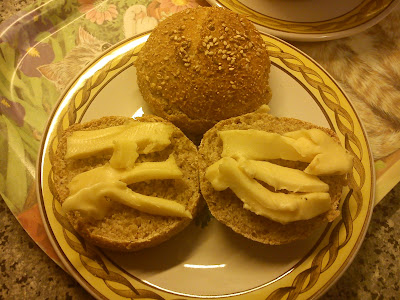 I got going again on my task to bake my way through the baking book called "Hjemmebagt". This time I tried out the recipe called Anton´s favourite bread, which I actually turned into buns instead of, as I have more rooms to store small portions of buns in my freezer than one big loaf of bread.

The flour in Anton´s Yndlingsbrød is a mix of wheat, rye and durum flavour. Besides from this there is maple syrup, buttermilk, sesame oil, sesame kernels and white poppy seeds. As I was kneading the dough together I had a wonderful flavour of sesame in my nose.

Just before baking the buns I decided to any some more sesame kernels as decorations on the buns. I got 14 buns of this bread recipe, so now I again have some buns in my freezer, I heat up a frozen bun in the microwave oven, which turns it into bun, which looks like it has just come out of the oven.
Posted by Kitchen of Kiki at 20:53